McKenzie & Co.
from Her Interactive 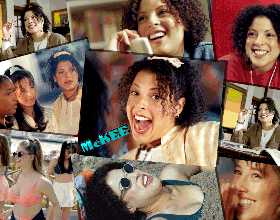 
Content
Did you ever wish you were someone else when you were in high school? Or that you could role-play your interactions with some unreachable guy? Here's your chance.

McKenzie & Company is an interactive role-playing program set in Madison High School. Through the extensive use of video clips, the user is presented with the opportunity to first choose which of two girls they wish to be, and then select one of four guys to try to get to know. From that point on, the user encounters situation after situation (some mundane, some exciting) where she is presented with choices -- where to go (home, the mall, school, a friend's house), what to say, what to do? Each decision leads down a different path.

The role-playing is in the context of the complete life of the character, not just school life. So in addition to interactions that take place at school, the plot and ideas develop at home, on the phone, while shopping, studying, or partying. In fact, the clues the user needs to collect are scattered all over town.

The program offers a seemingly endless number of paths, based on the series of decisions made by the user. Sound a little ambiguous? Well, that's the nature of being a junior in high school!

Ease of Install / Use
McKenzie offered our reviewers a few challenges in installation and use. On a PC, the setup program automatically installed a complete Internet access package, along with the necesary program files. How complete? Let's just say it totalled over 17 MB - unrelated to the operation of McKenzie & Co. -- on our hard drive when it was done. Even worse, the program does not come with an uninstall utility, so we were left poking around windows systems files when we tried to remove it all. Yuck! (We later discovered that this can be avoided by installing mcksetup.exe, rather than setup.exe. Sigh...)

Installation on a Mac offered a different challenge. Unlike most CD-ROM software, McKenzie requires the user to install some files from the CD onto the hard drive. Unfortunately, the instructions for this step are misleading. If followed explicitly, the user will copy 453 MB from the CD to the hard drive! Actually, only one icon should be copied onto the drive, totalling only 10MB.

McKenzie makes extensive use of video clips - the most extensive we have ever seen. As a result, the program is spread over five (yes, 5) disks, and the user is frequently prompted to change CDs. Kid reviewers using PCs reported only marginal frustration with this feature - their parents seemed more concerned. The same disk switching requirement exists on the Mac. Unfortunately, all the Macs we attempted to evaluate the program on had difficulty recognizing CDs beyond the main disk. As a result, we cannot recommend use on a Mac.

Methodology
The educational value in McKenzie is subtle, and more a matter of form than substance. The program makes no explicit attempt to present educational facts, or teach academic material. In fact, there are a number of educational opportunities that the software developers chose to dodge. For example, when homework is required, clicking on textbooks leads the user into a dozen different arcade-like games -- Literature is a Concentration matching game, Algebra and Music are variations of the classic Tetris stack-the-falling-objects game, and Biology leads to a garden version of Space Invaders (shoot the weeds, not aliens).

Instead, the educational value comes from the role-playing experience. This is a difficult age for many girls, so opportunities to see that other kids are going through some of the same emotional dilemmas is reassuring.

That said, our parent and older teen reviewers all noted that McKenzie portrays a very stereotypical, upscale, suburban lifestyle. For example, in one scene, our character's best friend says something like, "How could you guys not hit it off? That outfit is so you! I'm going to go to the spa for a facial. Ciao!"

Perhaps more importantly to parents of girls who show little interest in computers, this program was a strong draw with our kid reviewers. Given all the studies which show girls' use of computers declining in this age range, almost any reasonable activity which maintains their interest in, and use of computers may be valuable.

Proxy Parent Value
This is SuperKids' measure of how well a program captures and maintains a user's interest. McKenzie & Co. did a surprisingly good job of doing this with our 9 to 14 year old testers, even those frustrated by the difficulties they had trying to run the program on a Mac. The program offers a large number of variations, depending on the choices made by the user along the way, and seemed to strike a chord with this age group. They especially enjoyed buying and trying on clothes, and applying makeup to their alter-egos.

Best for...
McKenzie is best suited for the preteen or early teen who is intrigued by high school and dating, but not yet ready for it. For this group, the program's offer of virtual maturity is undeniably desirable, as evidenced by the popularity of movies like Clueless.

Bottom-Line
The younger end of the age spectrum is so thrilled by the topic that they are very forgiving about the inherent frustrations of disk swapping, and will spend countless hours with their new software classmates.

See also the Summary Rating Table for comparisons with other Girls Software programs, and the SuperKids Buyers Guide for current market prices of PC and Mac versions.