Fin Fin on Teo, the Magic Planet
from Fujitsu Interactive

For Ages 4 and up 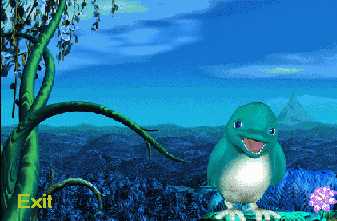 
Description
With the popularity of virtual pets (aka "Tamagotchi's") at full swing, along comes Fin Fin on Teo, described by his originators as Artificial Life, or A-Life technology. Fin Fin is a loveable looking creature, best described as a 'dolphin-bird'. His childlike face, and shy demeanor bring out the nurturing traits in all who approach him. But Fin Fin is not a fly-by-night entertainment package, easily accessed, used up and discarded. This virtual pet requires adoption on a higher level. He must be lured into a trusting, comfortable state through repeated and sustained interaction. The amount of pleasure derived from this program is directly proportionate to the amount of effort expended.

So what exactly does the user do with Fin Fin? The answer to that question is ever evolving, ever growing. Initial contact with the program is certain to produce disappointment. A child cannot expect to sit down with this program and experience hours of undivided entertainment. In fact, initial exposure will be minimal. It is only with time, spent communing on a quiet and patient level, that a relationship can form between the user and the entity that is called Fin Fin. There are responsibilities associated with this relationship. The user must, at times, search out Fin Fin's whereabouts, and summon him. At times he must be fed, calmed, coddled, cared for. In short, he must be treated in much the same way that a real pet would be handled.

Ease of Install / Use
This program installs without difficulty on Windows 95. It requires the user to connect an included "Smartsensor", a motion and sound detector that connects to the joystick/MIDI port. This sensor allows the user to communicate with Fin Fin. In addition, DirectX 3.0 must be installed on the user's computer. If it is not already installed, or the currently installed version is inadequate, it can be installed from the CD.

Educational Value
Fin Fin on teo's educational value is similar to the value derived from owning a real pet. Users ostensibly learn patience, communication skills, responsibility, and because of the bio-feedback section included in the program, respect for the environment. They also learn a bit about how to relate to a friend--to understand his needs and to give and take in the relationship. Finally, the program helps establish the computer as a friendly tool, that can be used on many levels and in many ways.

Kid Appeal
What child can resist a sweet little animal who smiles innocently, head cocked inquisitively to one side--a virtual friend who coos and sings, and makes it clear in every way that he wants and needs love and attention? Sounds like a sure-thing? SuperKids' child reviewers were quite taken with this program. Fin Fin is a bit difficult to get to know, however, and in some cases the initial input required to strike a lasting friendship proved to be too much.

Best for... / Bottom-Line
Fin Fin on Teo is best for the patient child, who enjoys spending time on the computer. It is not recommended for a child who requires immediate gratification, but rather one who is able to work toward long-term goals. Because of its creative nature, the program will appeal most to imaginative, children--those who enjoy fantasy. It compliments real life, filled with real animals and friends. It cannot, however, replace a real pet. Despite all of his charming attributes, Fin Fin can never sleep at the foot of a bed, or curl up and fall asleep in a loving lap.

See the SuperKids Buyers Guide / Price Survey for the current price of this PC-only title.