See also the and 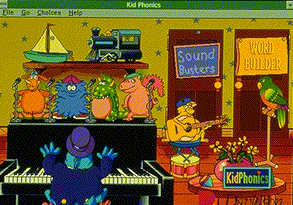 
Content
Kid Phonics is built around three main activities: a playroom featuring a piano and four "busters" who lead the user through several very well-done original rhyming songs; a "sound-buster" game where the user has to follow directions and solve auditory phonics problems like, "find the buster who makes the sound EE"; and a "word builder" game where the user must spell a word represented by a picture, using clickable letter buttons, and create sentences from word menus. The Word Builder also has a coloring section as a reward for spelling a word correctly. The program has 3 settable difficulty levels, as well as a large number of activities within each of those levels.

Ease of Install / Use
Installation was straightforward on both the PC and the Mac, albeit less difficult on the latter. Operation on a PC requires that your display device be set at 256 colors. Both parents and kids found using the program intuitive.

Methodology
Kid Phonics teaches reading skills utilizing an auditory approach, i.e. hear the sound, then pick the appropriate letters that make that sound. These range from vowels to beginning sounds, ending sounds, rhyming sounds, and non-rhyming sounds. Most of our parents and kids reviewers found this to be a reasonable approach, but several of our teachers questioned the strong auditory focus. One noted that the drills seemed more in line with teaching spelling skills, rather than reading.

Proxy Parent Value
Our kids reviewers were glued to their monitors with Kid Phonics -- if they had reached the point where they were interested in the concept of learning to read. If not, they generally used Kid Phonics as a guess and click type of program. Several of the activities are greatly helped by having a reading-capable person alongside the user. For example, in the Word Builder segment, after correctly spelling a word the user is asked to compose a sentence using the word, selecting the other words in the sentence from menus of words. A child could click on each word in the menus to hear them, but that's a pretty slow process not commonly seen as desirable by 4-7 year-olds!

Best for...
Kid Phonics is an excellent choice for a child ready to learn how to differentiate between spoken sounds. To get the most from this program, your child should also know the letters of the alphabet.

Bottom-Line
This is "an incredibly educational program," in the words of one of our teacher reviewers. She also found Kid Phonics to be "much better that most written drills and books, and far more educational than most animated storybooks." That said, she also expressed some concern about the auditory focus, and that the sequencing of skills taught was a little more random than she would have liked. Our parents liked Kid Phonics a lot, especially those frustrated by schools that prefer the whole language approach to reading. The only criticism levied by any of our parents, was that they found themselves humming one of the buster's rhyming songs for several days!

See also the and